During 2008/9 the use of cash based responses to humanitarian crises in Zimbabwe was hindered by the severe economic crisis and hyperinflation the country experienced. However the transfer to a multi-currency system in 2009, based mainly on the US Dollar and South African Rand, enabled aid organisations to again consider the use of cash in humanitarian responses. 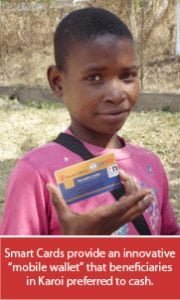 During 2008/9 the use of cash based responses to humanitarian crises in Zimbabwe was hindered by the severe economic crisis and hyperinflation the country experienced.  However the transfer to a multi-currency system in 2009, based mainly on the US Dollar and South African Rand, enabled aid organisations to again consider the use of cash in humanitarian responses.

Economic stabilisation since 2009 has restored financial services, with a range of local banks and private companies seeking to offer services to the previously unbanked.

Despite recent improvements, traditional banking services remain prohibitively expensive for most of the population and up to 80% of MFIs are estimated to have closed down during the economic crisis. Agencies implementing cash transfer programmes also have to contend with Zimbabweans’ lack of trust in the banking system as a result of their experiences during the recent economic crisis.  As a result, agencies implementing cash transfer programmes can play a significant role in re-connecting the poorest segments of the population to access to financial services.

In 2011 two organisations have for the first time led the way in demonstrating the possibilities for technology-based approaches to cash delivery in Zimbabwe by adopting two contrasting smart card cash systems within the urban areas of Karoi and Bulawayo.

Smart Cards Piloted for the First Time in Zimbabwe 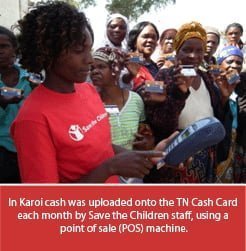 In January 2011 Save the Children partnered with TN Bank to implement the first use of a technology based cash delivery system by an aid agency in their humanitarian response in Zimbabwe.  TN Cash Cards were provided to 1000 participants in a Cash for Work program carrying out health and sanitation-related public works in Karoi. These Cards could be used to purchase goods using Point of Sale (POS) devices in local shops, or to obtain ‘cash back’ in these outlets or at the local TN Bank agent.  This was important in enabling beneficiaries to buy goods and services that are not available from the selected merchants, such as health fees and grinding mill costs. The TN cash cards are ‘chip and PIN’ smart cards which act as ‘electronic sub-wallets’ contained within a bank account held by the aid organisation. Cash was loaded on to the cards on a monthly basis by Save the Children staff, and the balance on the card was then automatically debited by the POS machine each time the card was used.  The TN Cash Card system has been well received by project beneficiaries because of its numerous advantages over direct cash, among them the ability to transact in fractions of dollars during purchases, as coins are generally unavailable in Zimbabwe.

Following the success of the Karoi project, World Vision has in recent months also introduced a smart card system for providing support to increasing the ability of very poor labour-constrained households in the Mzilikazi and Makokoba wards of Bulawayo City to meet their basic food needs.  In contrast to the Karoi project, the cash delivery partner chosen was Barclays Bank, which provided low cost access to individual bank accounts for 100 beneficiaries.  This was accompanied by provision of a smart card to access the cash through the bank, ATMs and the Zimswitch ‘link’ system, as well as allowing direct purchases though POS devices in certain major supermarket chains.  As beneficiaries are each given their own bank account, funds can be transferred to all recipients simultaneously by a single instruction to the bank, avoiding the need for agency staff to manually load cash onto each of the cards. 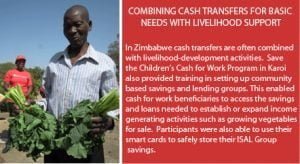 World Vision’s Bulawayo cash transfer project is also supporting the development of income generating activities through provision of start-up packages  of inputs, production and marketing training, the formation of Internal Savings and Lending Groups (ISALs), as well as support to the formation of market linkages for selling produce.

These two projects are providing important information about the country-specific aspects of technology-based cash delivery within Zimbabwe, and how the use of these types of approaches can be best adapted to best meet the needs of beneficiaries and increase outreach of access to financial services amongst the largely unbanked poor and very poor households in Zimbabwe.  The CALP Network Coordinator in Zimbabwe is providing support to the collection and sharing of learning experiences as technological approaches to cash transfer delivery begin to take root in the country.