Press Release: Providing cash directly to those most in need is revolutionising the way we provide overseas aid to the world’s poorest people

London, United Kingdom – As the global partnership for cash transfer programming in humanitarian aid, the the CALP Network takes issue with recent criticisms of cash transfers made by Nigel Evans MP and in the media.

Cash transfer programming is one of the most highly scrutinized forms of aid. The CALP Network’s members decide to use cash relief not only because it works but also because it saves taxpayers money compared to other traditional forms of aid. We applaud the British Prime Minister, Theresa May, for speaking out so strongly in favour of cash programming.

Far from being a waste of tax-payer money, providing cash directly to extremely poor and vulnerable individuals or families has proven to be one of the most effective and efficient ways of providing overseas aid and living up to our obligations as global citizens.

It is quicker and cheaper to reach people in need through relief in the form of cash. Not all people in crisis need the same set of items and delivery of physical goods incurs additional procurement, logistics and transport cost. In Ethiopia, a World Food Programme found cash to be more cost efficient than food aid by 25-30%. According to another study in Ecuador, Niger, Uganda and Yemen 18% more people could have been helped at no extra cost if everyone received cash instead of food.

Cash relief is also more effective in helping people recover from a crisis. Providing assistance in the form of cash after an emergency can literally save lives. Humanitarian cash transfers also allow affected people to fulfil basic needs according to their own priorities, making decisions for themselves rather than relying on bureaucracies.

The positive effects of cash relief go beyond the direct recipient. Robust evidence shows that cash transfers not only reduce poverty, they can also boost economic recovery and build the resilience of local markets.

Cash transfers help to deliver the efficient, lean approach to aid that donors aim to achieve. Digital payments systems and biometrics can reduce corruption and leakage as they allow aid to be directly traced from donor to recipient.

Cash alleviates suffering by ensuring people have the means to meet their basic needs, while enhancing dignity and choice. The CALP Network and its members will continue to improve aid so that it achieves as much as possible for people in crisis.

Released on behalf of the CALP Network’s members including: 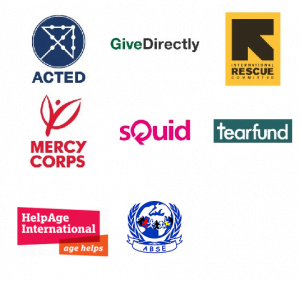 A full list of CALP members can be found here.