Cash Coordination: A proposal from members in MENA

Earlier this year the CALP Network undertook regional consultations to explore options for cash coordination. This blog lays out recommendations from participants from the Middle East and North Africa who sketched out what cash coordination, and coordination more broadly, could look like in future to support a more effective, efficient and accountable response.

The issue of cash coordination – what it should deliver, how it links with other coordination efforts, and who is responsible – has been a sticking point in humanitarian action for many years. The CALP Network’s State of the World’s Cash Report, drawing on feedback from more than 200 cash practitioners, found that lack of clarity around cash coordination was having serious operational impacts. Official calls for clarification have come from across the sector: from donors, who wrote a letter to the Inter Agency Standing Committee (IASC) in March 2018 asking them to “decide upon, and issue clear, actionable guidance on cash coordination leadership”;  from NGOs, who developed this common position in May 2018; and from Cash Working Group Leads across the world.

In response to these calls the Global Cluster Coordinators Group (GCCG), with the support of CashCap and the CALP Network, are developing cash coordination guidance for cluster coordinators and standard Terms of Reference for Cash Working Groups. The GCCG has also agreed that, in contexts where clusters are rolled out, the Cash Working Group should be a sub-group of the Inter-Cluster Coordination Group, which has overall responsibility for coordinating multisectoral assistance. Before finalising both documents they asked that the CALP Network consult with cash and coordination actors in the field. To this end, we held a series of workshops in February and March, in Amman, Dakar, Juba and Nairobi, gathering feedback on the current documents to ensure they reflect best practice and address key issues faced in cash coordination.

Some of the headline findings from these workshops will be shared soon. One common theme that emerged from all the regional consultations was the need for genuine intersectoral space, with the right capacity, resourcing and participation. This would enable actors to address a range of issues – including but not limited to cash coordination – that apply across sectors and that support a more effective, efficient and accountable response.

In Amman participants took this challenge one step further, and designed what they felt was an optimal cash coordination mechanism. Participants have allowed us to share their thoughts here as inputs into the broader debate. It should be noted that while this started as a discussion of cash coordination, all groups also discussed other areas of the coordination model.

Three groups worked from different starting points, ending up with three relatively similar models (click on the images for a larger version). 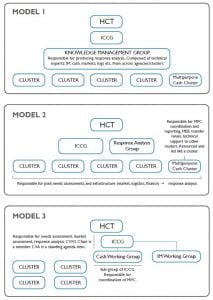 From the three groups, two broad types of model emerged – one building on the existing system, one with an additional body created. All models provided for a dedicated cash coordination group, responsible for the operational coordination of multipurpose cash, as well as an intersectoral body which generates analysis and action across sectors. Under all models, appropriate resourcing for and participation in these groups was highlighted as a critical factor.

On the first example, (model 3 above) the existing Intercluster Coordination Group (ICCG) would be strengthened and expanded, giving it the right capacity, the right linkages to the rest of the system, and more space for the planning and coordination of multisectoral assistance, including multipurpose cash. The expanded ICCG would be responsible for, and equipped to deliver on, needs assessment, market assessment and response analysis. It would set up a task team responsible for the planning and coordination of multipurpose cash.

On the second type of model (models 1 and 2 above) a “Knowledge Management Group” or “Response Analysis Group”, drawing on technical expertise and resourcing from across agencies and clusters, would be responsible for analysis and coordination of the key cross-sectoral functions – market assessment, needs assessment, logistics assessment, response analysis. This body would produce response analysis on an ongoing basis to support the approach of the HCT and ICCG. In addition, a coordination body responsible for cash coordination, the “market-based programming cluster” or the “multipurpose cash cluster”, would be responsible for the coordination of and reporting on multipurpose cash, setting the transfer value, developing the MEB and providing technical support to other clusters.

This model in some ways reflects a finding in the World Bank’s 2016 Strategic Note on Cash Transfers which recommends that:

“CWGs could provide a useful home for response analysis as noted above. As such, the CWGs could be formalized and replaced by Response Analysis Groups (RAGs) which would act as a help desk for both cash and in-kind transfers across clusters… The RAGs would to some extent mirror the work of the global “Engine Room” at the country level. The global Engine Room, which was instrumental in producing and reviewing this note, was comprised of technical staff drawn from different agencies that, as part of a wider initiative, collaborated to inform transfer selection processes. This may require further discussion among the IASC Principals to develop consensus on which options to take forward.”

After the three groups had presented their work, participants voted on their preferred model and a combination of 1 and 2 above emerged as the preferred approach.

What do you think? Does this approach take us in the right direction? Could a model of this sort be feasible everywhere? What issues do you see and what additional questions would you like to see answered? Please share your thoughts on the D-Groups.